Just a few days ago, I mentioned in my Sleek Blush Haul & Swatches post that I didn't own a color like Pomegranate.  I have take that back, because I now realized that I have a Milani blush that is very similar.  When I say this is a possible dupe, I don't mean it's exactly the same.  I just mean that they have a very similar look on my cheeks. 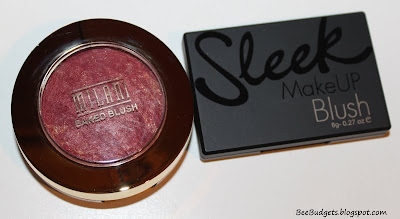 This is the Sleek blush in Pomegranate and the Milani Baked Blush in Red Vino.


Pomegranate has a bit more berry, while Red Vino has a bit more red.  Pomegranate does have some shimmer, but Milani has more obvious glitter in it.  I love Milani Baked Blush, even though it has glitter.  I think it gives a gorgeous glow.  When they are sheered out on my cheeks, I think they have a very similar effect.
Pomegranate is more pigmented, so I barely tap my brush in this blush once and blend well.  I think most baked products require a little more work to build up the color, but Milani's baked products are a bit softer and less dry than most baked products that I have tried.


Have you tried either of these blushes?  What do you think?
Posted by Bee Budgets at 5:34 PM